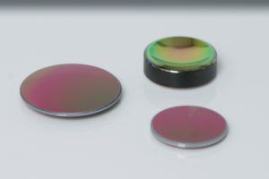 Gallium Arsenide (GaAs) is a tough, IR transmitting, semi-insulating and insoluble material that shares many mechanical properties with Germanium. Gallium Arsenide is typically used where hardness and durability are desirable.

Gallium Arsenide is commonly used in thermal imaging, light emitting diodes, FLIR (Forward Looking Infrared) systems, CO2 lasers and as single-crystalline film for use in high efficiency solar cells. As Gallium Arsenide is extremely durable it can be used in harsh conditions.

Gallium Arsenide is used as the substrate for infrared low-pass filters in spectroscopy.

Gallium Arsenide transmits over 40% between 2-15µm and has low absorbance over that spectrum. It has a hardness of HK750, slightly less than Germanium. The material is usually broadband antireflective coated to increase performance. Gallium Arsenide is typically used between 3-5μm and 8-12μm wavelengths.

Inside Knight Optical’s catalogue you’ll find details of the industries we serve as well as the many other services we can offer. It also showcases hundreds of our most popular products, supported by useful technical information, to help you choose the right part for your application.
Click below to view our digital catalogue now.