Under the Sea: Optical Components Used for Marine Biology and Deep-Sea Exploration

Here at Knight Optical, we supply a range of stock and custom-made optical components for an array of scientific fields of study. In our most recent blogs, we’ve explored how our optics are used underground, on land, in the air and up in space. Here, we delve further south into the deep blue and explore how our optics are used in the sea for marine biology and deep-sea exploration. 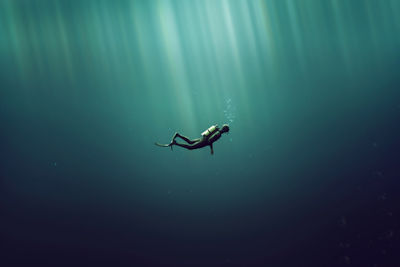 Marine biologists study all forms of life under the sea and the environments that enable marine life to thrive – such as plants and organisms. Today’s marine biologists are constantly unearthing discoveries within our oceans. As a relatively new field of study, oceanography began in earnest during the 19th century. Since its inception, we’ve been learning more about brand-new, never-before-seen ocean life within our waters year upon year. Modern-day technology has played a leading role in helping us to understand what lies beneath the lapping waves of our oceans over the years.

With only 5% of the world’s oceans explored and considering the ever-increasing pace of digital technology, the continuation of newfound life within our waters is set to increase over the coming years. In 2017, for example, almost 2000 new species were catalogued by the World Register of Marine Species (WoRMS), which include a glow-in-the-dark shark and a ruby seadragon1.

More recently, in 2020, an expedition by scientists from the Western Australian Museum, Curtin University, Geoscience Australia, Scripps Institution of Oceanography and Schmidt Ocean Institute uncovered the longest animal ever recorded. By deploying a robot, named ROV SuBastian, the team discovered an Apolemia (a siphonophore – a colony of small species called zooids) at circa 47m-long and 29 other new creatures2.

How Do Robots Help Deep-Sea Exploration?
Due to its mass, the ocean is one of the most difficult to explore territories we’re aware of. Remotely operated vehicles (ROVs), just like ROV SuBastian, lead the way in underwater research, helping us descend to depths that have previously been impossible. For optimum exploration, many scientists have examined the formation of sea creatures that live within these environments, simulating their composition through technological designs. For example, Nature Portfolio recently published an article on a self-powered robot inspired by a deep-sea snailfish’s structure that can swim freely in the South China Sea at a depth of 3224m3.

Another example, which poses very different environmental complexities, is detailed within the 2008 paper, ‘Deep sea underwater robotic exploration in the ice-covered Arctic ocean with AUVs.’ For this programme, two bespoke autonomous underwater vehicles (AUVs), named Jaguar and Puma, were deployed to explore the Arctic seafloor – one of the last unexplored areas on Earth4. More recently, a paper published in 2021 explores how soft robot technologies (a division of robotics that uses soft materials in their construction) can help to traverse environments that are “vast and harsh”5. 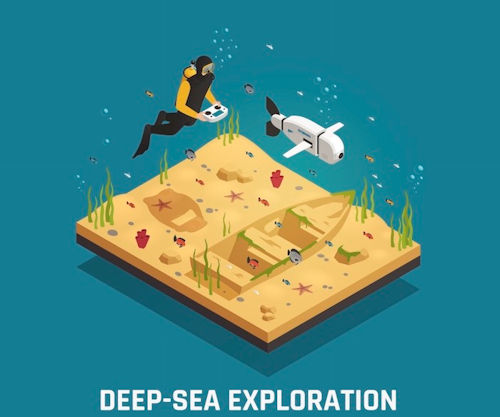 What Optical Components are Used for Undersea Robots?
These rigid robots have to withstand the harshest of environments. Travelling to the deepest, darkest parts of the ocean, these deep-diving robots require the highest spec, most durable optical components. Not only do these systems have to endure extreme pressures, but they also need to provide optimum visualisations of unexplored waters below.

It’s here that our Custom-Made Optics are effective – with millimetre-(or smaller)-perfect dimensions and customisable optical coatings for optimum operability in environments that could hinder all-important visuals.

Optical components that are widely employed for undersea robots include our stock and custom-made:

What Other Watercraft is Used for Deep-Sea Exploration?
Robots aren’t the only watercraft to assist underwater. The profits of submarine technologies are also being examined to 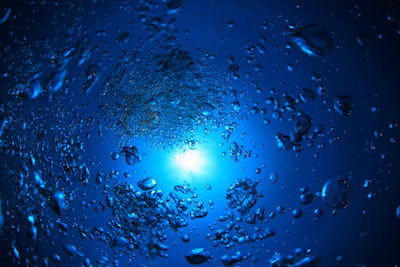 further marine exploration via high-powered autonomous submersibles6. Ocean observatories are also regularly deployed to analyse and communicate between underwater and ground environments – with the deepest observatory, the ALOHA Cabled Observatory (ACO) near Oahu, Hawaii, celebrating a decade in operation back in 20177. One of the more mysterious news pieces that hit the headlines in 2019 is the enigmatic, unexplained disappearance of an 800-kilogram, €300,000 underwater observatory near the Baltic Sea in Germany. Vanishing overnight (with a mass of essential data concerning the Baltic Sea), all that was left where the system once stood was a severed cable8. Although divers searched within 100m of the location and found tracks where the system had been dragged across the ocean floor, scientists are still unsure what happened to the observatory.

Submersibles and ocean observatories both boast high-performing technologies, and sensors are one commonality that the pair share. Within observatories, these sensors monitor environmental data, such as ground motion and chemicals, so we can understand more about the planet we inhabit. Within submersible applications, sonar sensors are probably the most known technology – ordinarily used to measure the distance between the vessel and an object via ultrasonic soundwaves.

Similarly, in a non-acoustic approach, LiDAR (light detection and ranging) technologies are being applied to submersible applications for deep-sea exploration. Competent in reaching the bottom of the sea, LiDAR has been used on submersible applications for many uses. For example, for the detection of hazardous substances on the seafloor9 or generally mapping underwater terrain.

Here at Knight Optical, we supply a wide-ranging portfolio of LiDAR optical components for such submersible applications, including:

Why Choose Knight Optical for your Application?
Here at Knight Optical, we supply a range of optical components for marine biology and deep-sea exploration applications. Discerning scientists rely on Knight Optical not only for the premium quality of our output and in-house state-of-the-art Metrology Laboratory and QA Department‘s capabilities but also because – as well as a range of Stock Optics (available for next-day dispatch) – we offer a range of sought-after Custom-Made Optical Components.

This year, we look forward to celebrating 30 years in business. With three decades’ experience under our belt and a whole host of long-standing world-renowned customers on our books, we are proud to have worked on some of the most ground-breaking innovations within marine biology and deep-sea exploration.