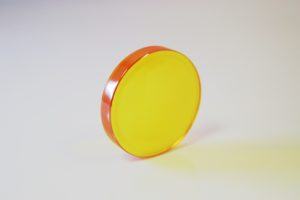 Zinc Selenide (ZnSe) is a polycrystalline, semiconductor that readily transmits from 600nm to 21µm, with around 70% transmission between 1-15µm. Produced by chemical vapour deposition (CVD) zinc selenide boasts a lot of impressive properties including:


Laser grade ZnSe IR lenses are often used as CO2 laser focal lenses as they transmit at 10.6µm, with minimal absorption. It is also the only infrared material which also transmits at 632.8nm which means it works for the CO2/HeNe laser pairing.

Dependent on the lens type, zinc selenide can be used in a number of ways for laser applications:

Zinc selenide beam combiners are also used when a CO2 and HeNe laser are used in conjunction with each other. The beam combiner, positioned at 45° to the CO2 laser, will transmit the CO2 beam (10.6µm) and reflect the HeNe beam (632.8nm) at 45° angle into the path of the CO2 laser beam, combining the two.

CO2 lasers are based on using a gas mixture as the gain medium. In a CO2 laser, this gas mixture is usually carbon dioxide (CO2), helium (He) and nitrogen (N2). Fundamentally, through the excitation of the nitrogen and carbon dioxide molecules within a tube, a beam of photons is emitted from the laser medium. A CO2 laser emits a beam at 10.6µm, which will not be visible to the human eye.
CO2 laser systems are often paired with a HeNe laser, which emits light at 632.8nm (visible red-light) which is then used align the CO2 laser beam.
CO2 lasers have many applications including welding, cutting, engraving and medical purposes. The wattage of the laser will vary depending on the application, but the power outputs are usually between 20-200 watts.

Zinc selenide is the chosen infrared substrate for a large number of optical components:

Please note, zinc selenide is a hazardous material and so precautions should be taken when handling it.

Knight Optical supplies high quality zinc selenide optics including windows, ranging from 7-70mm in diameter, and lenses ranging from 5mm to 25.4mm. Knight Optical can also provide custom zinc selenide optical components to meet your exact needs, from small micro optics to large diameters. We can also ensure your zinc selenide is coated to your specification, as in laser applications it is essential that your coating has a high damage threshold to withstand the laser beam without damaging the coating or optic.

Inside Knight Optical’s catalogue you’ll find details of the industries we serve as well as the many other services we can offer. It also showcases hundreds of our most popular products, supported by useful technical information, to help you choose the right part for your application.
Click below to view our digital catalogue now.