The 2021 United Nations Climate Change Conference – or as it’s otherwise acknowledged ‘COP26’ – sent waves through the sphere in November. As world leaders gathered inside Glasgow’s SEC for the 26th conference to formulate climate change antidotes, the world waited in anticipation for drip-fed updates on refined reformations and pragmatic pledges. In this blog, Knight Optical – the leading supplier of optical components for scientific applications and forward-thinking technologies – explores the crux of recent COP26 discussions and investigates some technologies that seek to alleviate concerns relating to the climate crisis.

In recent times, individuals have taken to their keyboards to voice their worries regarding climate change. Moreover, legendary advocates, such as Sir David Attenborough and Greta Thunberg, and eco-activists such as Insulate Britain – part of Extinction Rebellion – have unremittingly articulated their qualms surrounding environmental issues for years. Likewise, as we’ve mentioned in previous blogs, the COVID-19 outbreak, its associated restrictions, and subsequent outdoor deficiencies have intensified our consciousness of the natural world.

Today, the preponderance of worldwide businesses – from SMEs and mid-market enterprises to large, established corporations – are poised to play their part in helping to create a cleaner, greener planet, and COP26 is paving the way. Let’s identify a handful of the sectors that some of these forward-thinking businesses fall under and the cutting-edge technologies that are armed to overhaul current practices.

In a sustainable move and taking on board its own advice, COP stated in an early press release that it would be serving a locally sourced menu to delegates throughout the event, with 80% of the served produce coming from Scotland and 95% sourced from the UK1. The approach was intended to set an eco-friendly example for future large-scale events.

So, with locally sourced produce setting the scene for COP26, what specific technologies are assisting in harvesting local foods around the world?

For many readers, the term ‘locally sourced’ may invoke thoughts of a Sunday morning trip to a local farmer’s market, butcher, or fishmonger. Still, in newly industrialised areas such as India, the definition often results in a more laborious and potentially treacherous approach. Take, for instance, coconut harvesting. For decades, farmers from the South Asian country have been scaling soaring coconut palms (some of which can grow up to 30 metres!) to collect the sought-after drupe. It’s important here to note the significance of this product in India. In the south of the country, coconuts are known as a cultural staple for cuisine, health and beauty, ceremonial purposes and, remarkably, as by-products for building materials. 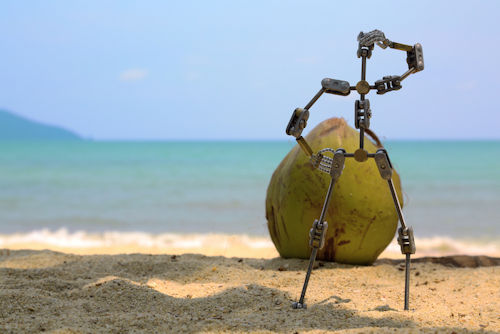 In 2012, the Los Angeles Times reported a deficit in coconut pickers in India and spoke to a small-time farmer from the Indian state Kerala about a praying mantis-like machine that he designed to harvest coconuts2. Although unsuccessful, his invention was in response to a 2009 declaration from the state that sought to offer a $20,000 prize to the ‘best robotic [coconut] picker’2 – which really represents the scale of the shortage. Just three years on from the Kerala farmer’s invention, and following numerous coconut-picking inventions, researchers explored several prototypes of a robotic arm system designed to attach to a tree-climbing robot in 20123. Moving forward to 2021, and drones appear to be stepping in to help the coconut-picking shortage. In June, it was reported that experts from Goa University and the Indian Council of Agricultural Research-Central Coast Research Institute were “filing a patent for a flying drone ‘cocobot’ that will snip selected nuts4“.

Alongside locally sourced food, COP26 has also drawn attention to low-carbon farming, with 45 Governments pledging investments for more sustainable ways of farming5. Today, numerous companies are investigating and implementing greener methods of modern-day agriculture. One of these brands is the UK-based firm Low Carbon Farming, whose objective is to move farming from fields to greenhouses as the popularity of plant-based diets in Britain rises. Low Carbon Farming’s drive is to grow fresh produce in more sustainable and less damaging ways within these glass constructions (not pictured) using renewable systems, such as ground source heat pumps (GSHPs)6. 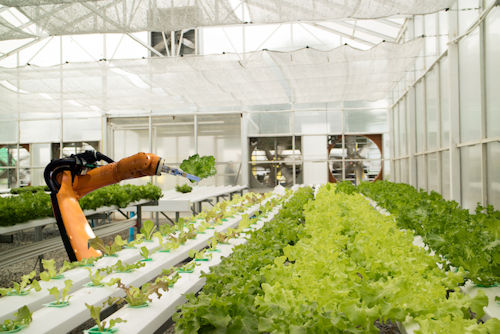 GSHPs aren’t the only form of renewables that are helping the agricultural sector decrease its carbon footprint. Solar technology is also stepping in – and, of course, it’s been given its own portmanteau – ‘agrivoltaics’. Across the world, acres and acres of active farmland have been transformed into dual-use environments comprising a solar farm, pastures for grazing animals and arable land – with crops yielding beneath solar panels7.

As well as masses of solar panels, wind farms are becoming a common sight both off- and onshore. In fact, the British agricultural title Farming UK published an article back in November 2021 about the importance of farming ‘diversification’ following recent happenings and media broadcasts that have impacted the sector. In the industry article, the publication wrote of magnifying land profitability by exploring options such as wind farms and solar parks8, validating a future change for current farmers suffering from financial loss.

On the second week of COP26, ‘Adaptation and Loss and Damage Day’ took place and identified the recent misfortunes that have struck the globe. Of course, over the last few years, we’ve seen extreme weather changes throughout the world – from the flash floods in Europe and China to the devastating wildfires in North American and Australia. The day focused on those countries most vulnerable to climate change, and the discussion concluded with 88 countries being covered by Adaptation Communications or National Adaptation Plans (NAPs)9. 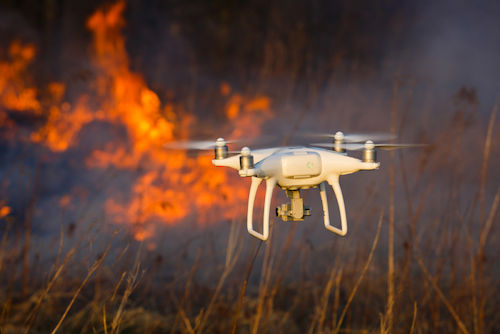 At our previous blogs, we’ve explored how technologies have come to aid individuals subjected to environmental disasters. One prominent device that seems to occur repeatedly (both within wildfires, saving animals, victims, and rescuers – and assisting on searches where floods have wreaked havoc) is the dependable drone. Equipped with sharp-eyed cameras, these devices have enabled search and rescue teams in both fire- and water-related disasters to locate and save the wounded in environments that are otherwise too hazardous for people to explore.

Much like the STEM shortage that we’ve recently been talking about here at Knight Optical, one of the conference’s many announcements included the UK Government’s Sustainability and Climate Change strategy, which is set to prepare the next generation with the skillset needed to drive forward the future of climate action, which leads us onto our concluding subject – science and innovation.

Of course, moving forward in making the world a greener place wouldn’t be possible without both science and innovation. Here at Knight Optical, we’re tremendously proud to operate in such a sector that yields the highest calibre of revolutionary inventions, and we very much look forward to witnessing the consequential technologies and devices that derive from COP26’s points, as well as training the next generation of optics STEM personnel to help deliver the future of technologically advanced visions.